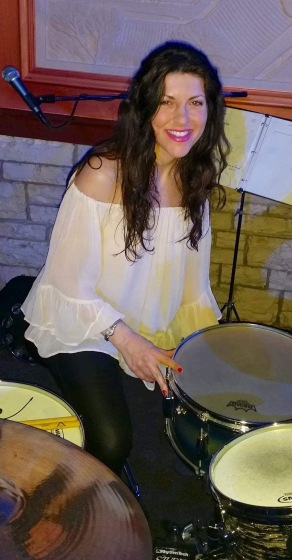 The title of this episode is “Embrace the Mundane,” but I really hesitate to call it that because our guest, Gina Knight, is about as far from mun-dane as you can get.

An incredible drummer, amazing teacher – and, by day, a super real estate agent (no, I’m not kidding), you probably know Gina as YouTube’s Drum Lessons Girl. A popular, helpful series of videos, her lesson on the half-time shuffle itself has over 700K views!

Gina is an incredibly busy, gigging Chicago drummer as well as a singer and all around entertainer. She’s even played drums in several episodes of the Fox hit series Empire – and she’s so humble, she didn’t even mention it in our interview.

So — why “embrace the mundane” – well, that’s Gina’s incredibly profound advice to new and returning drummers and by the end of this episode, you’ll see why it’s so important.

Pick up a copy of Gina’s three hour Drum Lessons Girl DVD and check out her website to keep up on all her shows and events.

And here is Gina’s complete drum solo video excerpted in the interview.

Gina’s talk about swing bands made me think of one of my teachers, Tim Froncek, who has an amazing video of “Sing Sing Sing” on YouTube that I want to share with you.  As mentioned, Tim, a professor of music at Grand Valley State University in Grand Rapids, Michigan, is the teacher who appears in my self-deprecating podcast intro.  Enjoy!

By the way, I just have to say I love that story of five-year-old Gina telling those boys at Radio Shack how NOT to play piano!  A lifelong educator if ever there was one.  So grateful to Gina for her time and her profound thoughts on drumming.  You’ll all really enjoy this one!

View all posts by mkcontraption

Want to be on the Podcast?

If you’re a drummer or drum educator and are interested in appearing on Contraption, email Mike at mkcontraption@gmail.com